Austrian company SBI manufactures thickness gauges for film and sheet extrusion since 1999. Goal and challenge were (still is) to develop high accurate, non contact measurement systems which are very easy to operate. All SBI thickness scanners

don't need special permissions for installation and don't need special trained safety officers. These inline measurement systems for film and sheet extrusion are most reliable and simple to operate. Especially because of the ease of operation SBI's systems are highly accepted by the operators on extrusion lines.

On main screen of thickness measurement system the thickness of a film or sheet is displayed over width and over bolt-number of extrusion-die. Set tolerance-values are shown in red, production out of these tolerances will cause an alarm. This gives operator chance to adjust extrusion-die early enough and operator sees quickly on which bolt the extrusion-die needs readjustment. Corresponding bolt mapping calculates also neck-in in the edge region of the plastics film. History of last 24 hours is shown also on the main screen: Trend diagramm shows thickness average, minima and maxima as well as set tolerances.

For closer inspection you can enlarge areas in the diagrams. Of course there are a number of additional screens available for displaying various parameter for extrusion (histories, quality parameters, production parameters like manufactured running meters, weight, running meters on actual roll, weight on actual roll e.g.)

With all SBI inline thickness gauges you can control the thickness average during extrusion (length profile control), if a connection to downstream is possible. 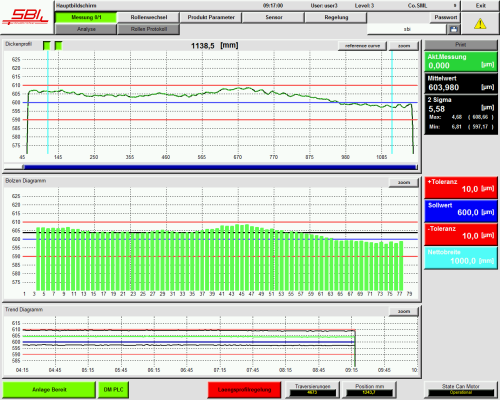 SBI offers new inline thickness gauge with combination of capacitive and infrared sensors. This sensor combination enables the detection of total thickness as well as thickness profile of EVOH layer during the extrusion process.

This system was developed originally for PP//EVOH//PP, but is also available for multilayer sheet like PS//EVOH//PS, PET//EVOH//PET e.g..

On extrusion-lamination (coating) lines there are at least two scanners installed. At first the thickness of extrudet substrate (PET e.g.) will be measured and controlled (if an automatic extrusion-die is installed).

On the "control screen" of thickness gauge you see also thickness profile over bolt number (thermal bolts number), as well as set value. Set value must not be even. For every bolt can be adjusted a separate set value if required. With this feature dedicated areas can be produced thinner, for example where are knives for middle cut and edge trimming are located.

2. diagram shows actuating variables of every actuator (thermal bolts). If 100 % is reached, you have to readjust manually. 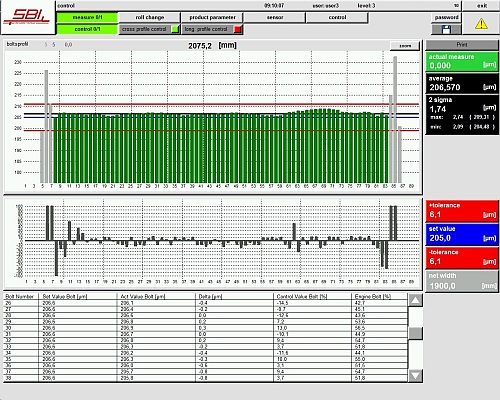 Automatic thickness control has one very big advantage: it is always present at the extrusion line and starts adjustment earlier than operators.


Reasons for thickness gauging and control:

There are several reasons for inline thickness measurement on extrusion lines for film and sheet,

some are listed here:

Cookies make it easier for us to provide you with our services. With the usage of our services you permit us to use cookies.
Ok